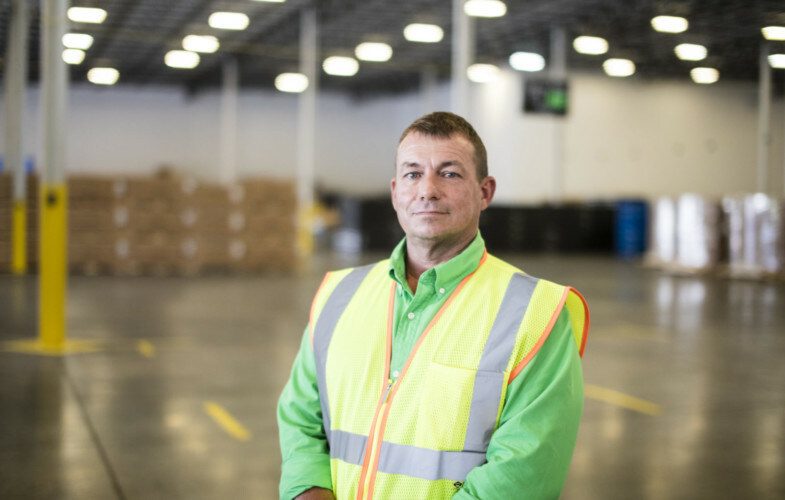 Under Jeff LeBlanc’s careful stewardship, the Shoreside Logistics’ Jacksonville warehouse has grown from an initial 24,000 square feet to 94,000 in a handful of years.

Louisiana native Jeff LeBlanc first made his way east to Jacksonville, Florida more than 20 years ago. Hailing from Lacassine, a small, unincorporated community bordering Interstate 10 equidistant from the Texas border to the west and the Gulf of Mexico to the south, LeBlanc grew up on a farm.

“It’s mostly farmland down there, still to this day,” explained LeBlanc in his faint accent. “My parents were born and raised in the same area, grew up farming rice and soybeans. My people are Cajun, pure Cajun.”

One of only 29 members of his high school graduating class, LeBlanc was initially attracted to the aviation industry, wanting to work on planes and eventually fly them.

From planes to trucks

“When you’re a farmer, you pay for a lot of crop dusting, to fertilize, apply pesticides, you name it,” he said. “A lot of the crop-duster pilots down there own their own operations. In junior and senior high school, I got to be friends with some of them. While I was going to school, I was also putting in some hours at (SOWELA Technical Community College) to become a maintenance technician, and there were additional classes you could take to get your pilot’s license. I guess I just let life get in the way.”

After graduation LeBlanc joined the Marine Corp Reserve, continued taking classes at SOWELA Tech, and soon had a very

“In the evenings, I was working for TransAmerica Transportation at a Crowley Terminal,” he said. “Crowley went ahead and offered me a job as a maintenance supervisor. At the time, the aviation industry was faltering a bit around the Gulf of Mexico. In the early ‘80s, the country started buying foreign oil and there was a crash.”

For LeBlanc, Crowley seemed like the best opportunity where he began as an Operations Supervisor, stevedore, loading the ships, barges and yard operations.

He accepted a transfer to Jacksonville in 1995.  In 2000, he married, and left Crowley to work for a customer, LeBlanc Enterprises.

“There’s no relation,” he laughed. “I worked for him until September of 2009, which is when I went to work for Spectrum Logistics.”

“I was approached by Sea Star Line, now TOTE Maritime Puerto Rico, not long after they started their logistics branch, called Spectrum. They wanted to add warehousing to their trucking and global services.”

LeBlanc helped start the current warehouse from scratch, from an initial 24,000 square feet to 94,000 in a handful of years. Sister companies TOTE Maritime Puerto Rico and Tropical Shipping are closely tied to Shoreside’s operations.

“If you ship out to the Caribbean, you pretty much know who all the players are,” he said. “It’s a pretty tight group. Most of my customers are tied to TOTE as their ocean carrier. We have a lot of the same customers.”

The warehousing side of the business

According to LeBlanc, the main types of warehousing Shoreside does are cross dock, consolidation and de-consolidation. Most of LeBlanc’s customers require cross-dock and consolidation.

“Say you’re a company shipping to Puerto Rico,” he explained. “The most economical way to do it is to ship it to Jacksonville via rail or truck carrier, take it to the warehouse, and transfer the contents into an empty TOTE or Tropical container and deliver it to the port. Cross-dock means one container to another.”

Consolidation, LeBlanc continued requires shipped goods of multiple suppliers to be consolidated into full loads for shipping. When deconsolidating, LeBlanc receives a full load of orders that must be broken up and shipping out individually or in groups to addresses across the country.

“I’m going to stay on the warehousing side of logistics,” he said. “I’ve been in everything on the maintenance side, supervising the loading and unloading all types of vessels, working in all types of container yards, and now that I’m on the warehousing side, I really enjoy it. On the ports, a 60 hour week makes for a long week – when a vessel hits the dock, you have to be there, regardless – but now I have much better balance between my work and family life.”

LeBlanc said Shoreside Logistics is growing all the time, out of necessity for its customers.

“We have a lot of service we provide besides just the trucking,” he said. “We can take care of a package from Point A to Point B. That said, there’s a very high need for drayage in this area, with drivers becoming a rare commodity. Our treatment of drivers has helped us grow the fleet, and when you tie in our broker and warehouse services, we’re really a one-stop shop. I plan to retire right here at Shoreside.”

LeBlanc lives on 10 acres on the west side of Jacksonville. He grew up fishing in Louisiana’s brackish waters, but now he keeps his own one-acre pond stocked with bass and bream. In addition to tending their mini farm complete with horses, cows and donkeys, LeBlanc rides motocross and travels to watch his wife compete in barrel racing.

“I feel good,” he said. “I didn’t start back riding again until four years ago. I ran a 15K this past March, and I have a 24-week training program coming up for a breast cancer marathon in February.”

LeBlanc makes the 750-mile drive back to Louisiana once a year – this year for Christmas.

“My dad raises Quarter horses. I grew up riding the traditional Cajun Mardi Gras through town and country, collecting money for a free community gumbo. I miss it, but Jacksonville is my home now.”